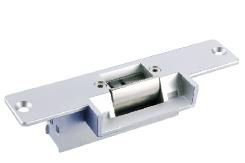 An electric strike is an access control device used for doors.
It replaces the fixed strike faceplate often used with a latch bar (also known as a keeper).
Like a fixed strike, it normally presents a ramped surface to the locking latch allowing the door to close and latch just like a fixed strike would.

Available in NO or NC

Usually used for standard swinging doors with a latch on the door.